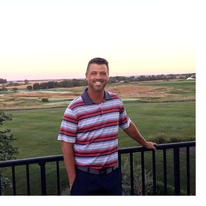 Tim Brown started his professional career in 1991, as an Assistant Golf Professional, at St. Andrews CC in Boca Raton, Florida.  St. Andrews was famed for producing great golf instructors, such as Bob Toski, Peter Kostis and the Golf Channel's Martin Hall. Martin Hall and LSU Coach Chuck Winstead tutored Tim on the art and science of golf instruction.
In 1994, he was hired as an Assistant Golf Professional by the legendary Tim DeBaufre at the prestigious, Philadelphia Country Club. Quickly establishing a reputation as a solid young teacher; he was asked by Mr. DeBaufre to become the Teaching Professional at PCC; Tim was extremely happy being home and teaching at a great club.
However, shortly after settling in at PCC; he received a call from Martin Hall, and was offered a chance to work for the Nicklaus/Flick golf schools; where he flourished as a full time member of the Nicklaus/Flick Team.
In 2000, he became the Director of Instruction at the Jack Nicklaus designed English Turn Golf and Country Club, in New Orleans, where he stayed until Hurricane Katrina 2005. During that difficult time, Tim took the Head Professional position, at the RTJ designed, Timberlane CC and continued on with his own golf Academy.
As a PGA class A professional; Tim has cultivated a national reputation among his students and peers. He was even ranked by Golf Digest as the Best Teacher in Louisiana.
Tim's instruction includes; Mind Factor Certification (mental game) Swinguru 3D, Flightscope 3D - X2 launch monitor, Tomi Putting motion analysis, Casio high speed cameras and V1 golf video software.​